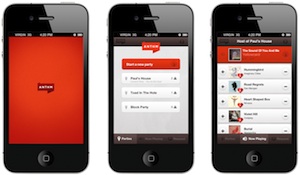 A new Winnipeg-made smartphone app for the Apple iPhone allows users to control the music being played in their location when they create or join location-based parties.

Anthm is a free app powered by Rdio, a streaming music service, and can handle requests from any of the 12 million songs available on the on-demand service.

“Musical democracy is our way of giving people control over the music they hear in public places,” said Ben Myers, co-founder of Anthm. “Today’s technologies are too powerful for people to be listening to songs they don’t like. Anthm finally puts people in control of the music.”

Anthm’s voting mechanics allow people to vote songs in the queue up or down, with the highest voted song becoming the next to play. Called a “21st century jukebox,” it gives people the opportunity to collaboratively curate an evolving party playlist.