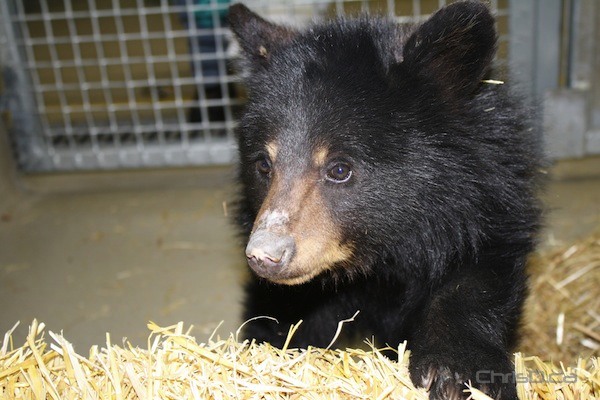 The Assiniboine Park Zoo is currently taking care of this black bear cub, found to be malnourished in the Whiteshell area. (HANDOUT)

The International Polar Bear Conservation Centre (IPBCC) at the Assiniboine Park Zoo has its first inhabitant.

A malnourished black bear cub found in the Whiteshell region was turned in to Manitoba Conservation and Water Stewardship, and was later transferred to the zoo for care earlier this week.

“We knew the arrival of any bear at the IPBCC would require a quick response and this was no exception,” said Tim Sinclair-Smith, director of zoological operations for the Assiniboine Park Zoo. “We received the first call from Manitoba Conservation on Tuesday and the bear arrived on Wednesday — that’s just the reality you deal with when there’s an animal in need of assistance.”

The main focus of the IPBCC is polar bears, but officials didn’t shy away from providing care for the black bear cub.

“The arrival of the cub also gives us a great opportunity for a trial-run of the facility for when the first polar bear cub comes our way.”

Veterinarians examined the cub and found it to be in reasonably good health.

Other black bears are part of the zoo’s future collection plan, but an exhibit for the cub isn’t available at this time. Once it’s given time to recuperate and acclimatize, it will be transitioned to another accredited zoo.

Any member of the public is discouraged from taking in a wild animal, and is asked to call (204) 945-6784 or the nearest Manitoba Conservation District Office if finding one in need of assistance.