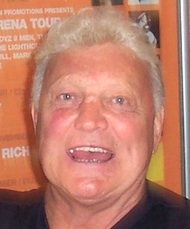 Former Winnipeg Jet player Bobby Hull is in the city today to sign copies of his new book, “The Golden Jet: A Spectacular Career in Stunning Photographs.”

Later in the day, both Hull and former NHLer Ulf Nilsson will appear at a news conference for an announcement surrounding the Amadeus Steen Foundation.

An earlier version of this story incorrectly reported that Hull and Nilsson would be signing autographs at Tavern United. That event was held on Thursday, not today. Incorrect information was received from the promoter.