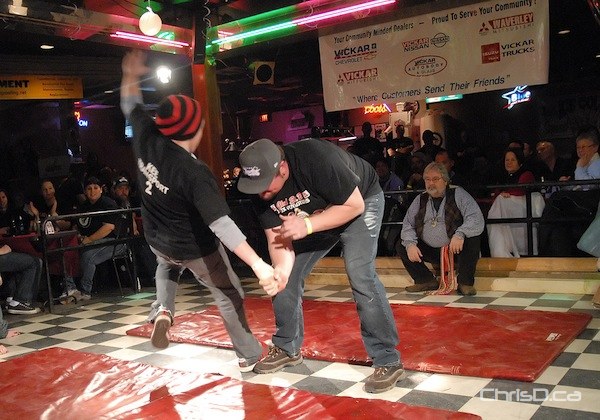 Two men battle for supremacy during the Voyageur Games at Club St. B on Thursday, February 23, 2012. (STAN MILOSEVIC / CHRISD.CA) 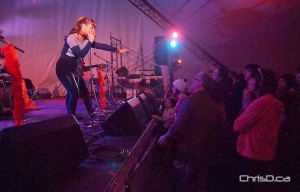 Those 10 days are sure going by fast, and now Festival du Voyageur is quickly coming to an end. But before the fun ends on Sunday, there’s still plenty of opportunities to enjoy it.

Besides Voyageur Park, Cajun Night will be happening just up the street at the Voyageur Trading Post (Franco-Manitoban Cultural Centre) at 7:30 p.m. tonight. The popular show will feature Roddie Romero and the Hub-City All Stars from Louisiana. Cajun food will also be served on site by Le Garage Café. 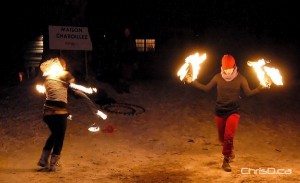 Also happening at the Voyageur Trading Post tonight is the popular Beard Growing Contest. Four categories of beards will be judged, including voyageur, festival, novelty and the media category, in which ChrisD.ca photojournalist John K. is participating in.

On Saturday and Sunday, the 41st Jigging and Fiddling Contest will be held at the Voyageur Trading Post. Participants of all ages will demonstrate their musical talent on stage.

Festival du Voyageur will officially come to a close at the Closing Ceremony on Sunday at 4:45 p.m. in the MTS Rivière-Rouge Tent.

Visit HeHo.ca for a detailed schedule of events.

← Previous: Dragons' Den Auditions Coming to the City in March Next: Stoughton Rink to Be Inducted into Order of the Buffalo Hunt →
Tags: Festival du Voyageur