Stoughton Rink to Be Inducted into Order of the Buffalo Hunt 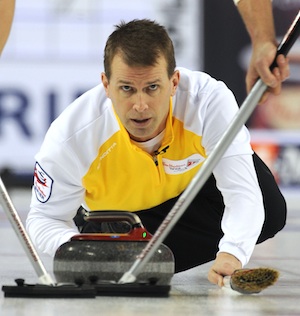 The Jeff Stoughton curling rink will be inducted into Manitoba’s Order of the Buffalo Hunt on Saturday evening.

Premier Greg Selinger will present the provincial rink with the honour during the Hit and Roll Bonspiel and Gala in support of the Manitoba Lung Association at the Victoria Inn.

“Team Stoughton has committed over 24 years to one of Manitoba’s most cherished sports,” Selinger said. “The dedication of the members of the Stoughton rink to their team, families and careers make them very deserving recipients of the Order of the Buffalo Hunt.”

Team Stoughton has earned numerous titles and brought home gold from the Safeway Championship in Dauphin, the Tim Hortons Brier in London and the World Curling Championships in Regina.

The Charleswood rink is also made up of Jon Mead, Reid Carruthers and Steve Gould.