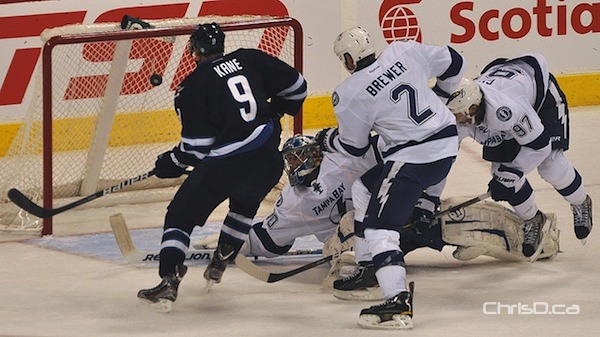 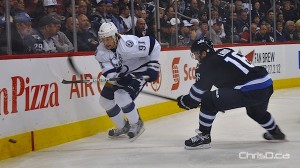 WINNIPEG — The Winnipeg Jets cruised into a playoff spot with a 4-3 victory over the Tampa Bay Lightning Thursday night, leapfrogging the Florida Panthers for top spot in the Southeast and securing the No. 3 seed in the Eastern Conference — for the time being.

“We’re not going to separate our shoulders being first in the division,” said coach Claude Noel of avoiding too much back-patting with 19 games to play before the post season. “If we can gather some momentum and some confidence in this home stand, which it looks like we’re doing right now… that’s something we can build off of.” 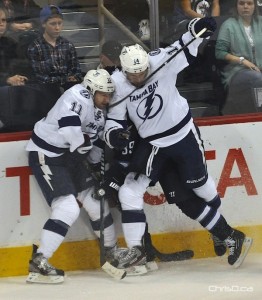 Winnipeg Jets' defenceman Tobias Enstrom is crushed against the boards by a pair of Tampa Bay Lightning players at MTS Centre on Thursday. (MAURICE BRUNEAU / CHRISD.CA)

In the midst of their longest homestand of the season, the Jets have captured nine of a possible 10 points in their last five games, and with seven of their next nine matchups slated to be within the friendly confines of MTS Centre, Winnipeg is a team that very much deserves to be in the playoff conversation.

The Jets power play has been on fire as of late, going 7-of-8 with the man advantage dating back to Sunday’s 5-1 beat down of the Colorado Avalanche. Quite a turnaround from a group that even struggled to create extended power play pressure earlier in the month.

“We weren’t very good for a long time,” said Winnipeg’s leading point scorer Blake Wheeler. “The hockey gods, I think they ignored us for a while.”

Ladd (4G, 4A, in last four games) is among a handful of Jets who continued their torrid scoring pace on Thursday. Wheeler’s two assists extended his point-scoring streak to five games (1G, 10A), while Dustin Byfuglien’s power-play goal and assist gives him 13 points in his last eight. Evander Kane notched his eighth point in his last five games (5G, 3A), while Bryan Little’s assist extends his point streak (4G, 3A) to four games.

“It comes with good teamwork,” said Byfuglien of his recent scoring outburst after returning from a knee injury that kept him out of the All-Star Game. “The team’s everything. Nobody can do it by themselves.”

The Jets will attempt to distance themselves from the Florida Panthers (who hold four games in hand on Winnipeg) on Saturday afternoon when they host the St. Louis Blues at MTS Centre. Puck drop is at 1 p.m.