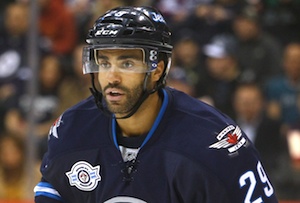 WINNIPEG — Monday afternoon, roughly one hour before the NHL trade deadline of 2 p.m. CST, the Winnipeg Jets made their first major trade since summer, sending 30-year-old defenceman Johnny Oduya to the Chicago Blackhawks for a 2nd and a 3rd round draft pick in the 2013 NHL Entry Draft.

The departure of Oduya comes on the heels of Winnipeg’s waiver wire pickup of defenceman Grant Clitsome from the Columbus Blue Jackets on Monday morning.

Clitsome, a 5’11” 215lb 26-year-old native of Gloucester, Ontario, has logged 93 career games over parts of three NHL seasons. In 51 games with the Blue Jackets this year, Clitsome amassed four goals, 10 assists, 24 penalty minutes, and a minus-6 plus-minus rating. He is under contract through the 2012-13 season, and is slated to make $1.4 million with a salary cap hit of $1.25 million.

The 6’0” 190lb Swedish-born Oduya, who is slated to become an unrestricted free agent this offseason, tallied two goals, 11 assists, 33 penalty minutes, and a minus-9 plus-minus rating in 63 games with the Jets this season. He was originally drafted in the 7th round (221st) of the 2001 NHL Entry Draft by the Washington Capitals, and spent parts of four seasons with the New Jersey Devils before joining the Atlanta Thrashers during the 2009-10 season.

Jets general manager Kevin Cheveldayoff, who pulled the trigger on the deal, served as the Blackhawks’ assistant GM for two seasons.