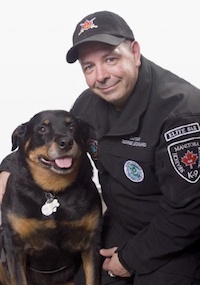 A Manitoba Search and Rescue service dog with the elite K-9 team has passed away.

“Stinky” was 11-years-old and is the most famous and decorated dog in the unit. She was credited with saving seven Canadian forces combat veterans suffering with PTSD, for which she was inducted into the Purina animal hall of fame in 2011.

“I am overwhelmed by the support that I have received from the Canadian forces veterans and their kind words,” said George Leonard, the dog’s handler. “For a dog to save one life is amazing but for a dog to save seven — I am beyond proud.”

Stinky taught thousands of northern remote first nation and city youth how to safely interact with dogs in the community through the Winnipeg Foundation sponsored the no bite program.

“She broke the stereo type of the Rottweiler and that you can’t get quality dogs from a rescue shelter,” Leonard added. “She will be greatly missed but her legacy will reach many more thousands of people.”