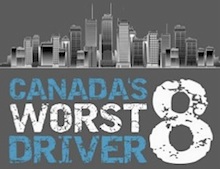 Are you terrible at driving and also live in Winnipeg? The producers of the Discovery Channel reality show “Canada’s Worst Driver” want to hear about you.

Nominations are now being accepted for local drivers to take part in the Proper Television-produced series, which follows a group of not-so-good drivers behind the wheel.

The show puts drivers through a series of challenges as a way of improving their core driving skills. Each week, one person graduates and returns to city streets as a safer, more skilled motorist. At the end of the series, host Andrew Younghusband will name one lousy licensee “Canada’s Worst Driver.”

Producers will be in Winnipeg this April to meet with nominees. The lucky ones selected will begin filming the eighth season of the series in Ontario in June.

“Let’s face it, everyone knows a bad driver. We’re here to help. This isn’t just about a TV show. For a lot of people, driving means freedom, and driving safely might mean saving lives,” said executive producer Guy O’Sullivan.