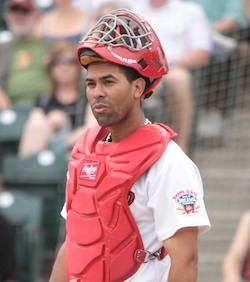 Catcher Luis Alen is returning to the Winnipeg Goldeyes for a fourth season.

The baseball club announced the re-signing of the 26-year-old on Friday, who hit .322 with five home runs and 57 RBI in 93 games. He also led the Goldeyes with 30 doubles — a career high for him — along with Jon Weber.

“He’s a solid contributor on the offensive side and defensive side,” manager Rick Forney said. “He’s as good as any catcher in our league defensively and offensively he’s matured a bit more each year. We hit him in the middle of the line up last year. He puts the ball in play and he’s certainly become a good RBI guy.”

The Goldeyes now have 14 players signed for the 2012 season, including six pitchers and eight position players.