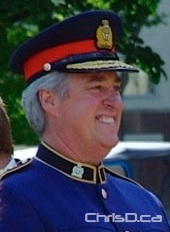 Winnipeg police Chief Keith McCaskill will retire in December, nearly five years to the day he assumed the position in 2007.

McCaskill made the announcement at a news conference at the Public Safety Building on Friday, saying he would step down when his term ends on December 9.

McCaskill, a 30-year police veteran with the service, told reporters the decision was his own and was made in the interests of family. His wife, Grace, stood by his side while he made the announcement.

He said he would prefer his replacement be hired from within the Winnipeg Police Service, so that progress continues to be made on important issues.

Prior to being sworn in as Chief of Police, McCaskill served as the Provincial Coordinator of Aboriginal and Municipal Law Enforcement with the Province of Manitoba’s Criminal Justice Division.

McCaskill gave his notice to Mayor Sam Katz on Wednesday.