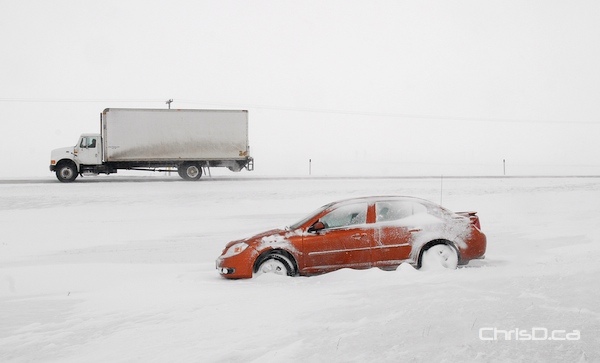 A vehicle sits in the ditch near Highway 8 north of Winnipeg on Friday, March 2, 2012. (STAN MILOSEVIC / MANITOBAPHOTOS.COM) 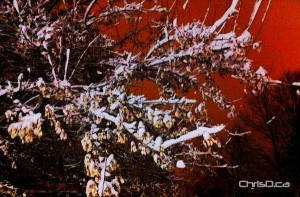 Snow sits on the branches of a tree early Friday morning in Winnipeg. (CHRISD.CA)

Heavy snowfall overnight in southern Manitoba had motorists taking their time during the Friday morning commute.

Several centimetres fell on Winnipeg and another two to four will fall throughout the day. The wet-falling snow was also to blame for a power outage in the St. James area after an accumulation of it built up on power lines, creating a pole top fire. Manitoba Hydro had power restored shortly before 8 a.m. 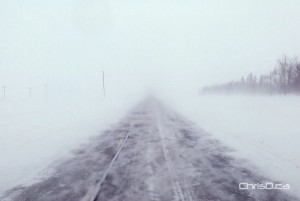 City sanding trucks were also out to add traction to the roadways, including on the Perimeter Highway.

The cleanup is using about 150 pieces of equipment at a cost of approximately $400,000. The city lifted its annual snow route parking ban earlier this week, so drivers can visit Winnipeg.ca to find out when their street is scheduled to be cleared.

Outside of city limits, visibility was reduced and icy conditions were prevalent. The Trans-Canada Highway in both east and west directions was reported to be snow-packed with swirling snow in traffic. Blowing conditions were also creating drifts in the passing lane between Winnipeg and Portage la Prairie.

Environment Canada says the snow should taper off by late afternoon or early evening as our daytime high reaches -7°C.

Looking ahead to Saturday will bring mostly cloudy conditions with a high of -10°C.