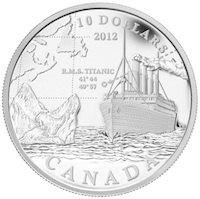 A $10 silver coin was unveiled by the Royal Canadian Mint on Monday to honour the 100th anniversary of the Titanic sinking.

The coin, which is 99.99% pure silver, debuted at the Maritime Museum of the Atlantic in Halifax. Along with the $10 coin, the Mint has also produced a coloured 50-cent silver plated coin and 25-cent cupro-nickel coin.

The coins will be sold at the Mint’s boutiques in Winnipeg, Ottawa and Vancouver, as well as at participating Canada Post outlets.