Home » News » Snowy Owl to Be Set Free After Rehabilitation

Snowy Owl to Be Set Free After Rehabilitation 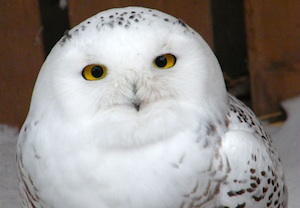 A snowy owl similar to this one was injured last November and will be released back into the wild. (PWRC)

A female snowy owl will be released back into the wild on Thursday after being cared for by the Prairie Wildlife Rehabilitation Centre (PWRC).

The snowy owl was hit by a car near Stonewall, Manitoba on Nov 26, 2011 and was brought to PWRC with an injured hip. She spent three months healing and is now ready to take flight again and resume her winter foraging before migrating north later in March.

The public is invited to attend the release in Quarry Park, near the Quarry Park Heritage Arts Centre, at 11:15 a.m. on March 8.