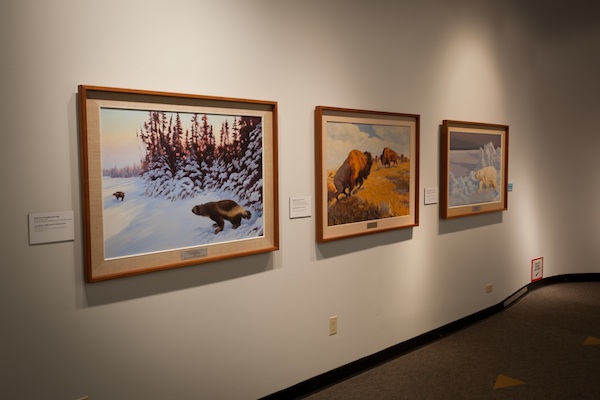 An exhibit showcasing the work of artist Clarence Tillenius will open to the public on Thursday. (THE MANITOBA MUSEUM / HANDOUT)

The works of art created by a legendary artist will be put on display Thursday at the Manitoba Museum.

“Wildlife: A Tribute to Clarence Tillenius” features nine original paintings and six sketches, including Polar Bear Hunting Along the Floe Edge and Timberwolves Resting at Sunrise. The artwork will be located in the museum’s Urban Corridor, and is free with regular gallery admission.

Tillenius’ work can already be seen throughout the museum, including the Bison Hunt diorama at the entrance of the galleries, and the polar bear and caribou dioramas in the Arctic-Sub Arctic Gallery.

Clarence Tillenius (1913-2012) originated from Manitoba’s Interlake region and was initially self-taught in wildlife art. He lost his painting arm on a CNR construction job in 1963, but a year later was taking painting classes with Alexander J. Musgrove to rehabilitate.

Tillenius produced nearly 20 dioramas for museums across Canada and the United States.

← Previous: Buskers Compete for Coveted Spot at The Forks Next: Blue Bombers Win Award for Best Marketing in the CFL →
Tags: Manitoba Museum