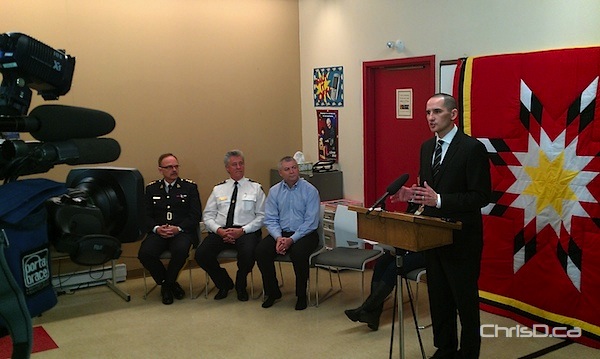 Consultations between communities and the Manitoba government will work to create a crime prevention strategy throughout the province.

Children and Youth Opportunities Minister Kevin Chief announced Thursday the province will hold community engagement meetings in the area of crime prevention with community groups, school divisions, law enforcement agencies, local governments and Aboriginal communities in the coming weeks. Stakeholders in Winnipeg, Brandon, The Pas and Thompson will have the opportunity to make their voice heard. The public will also be invited to weigh in during the consultations.

“We need to work together to give our children opportunities and we want help to find effective ways to keep our communities safe,” Chief said.

Representatives from the Coalition of Community Based Youth Serving Organizations, the Winnipeg Police Service and the RCMP were also on hand for the announcement.

The province will release a summary document later this year that builds on existing prevention efforts and embraces new ideas with which communities and partner organizations have had success.