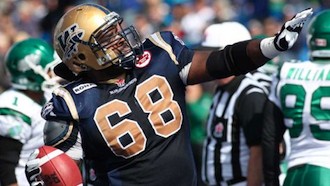 The football club announced Monday that the 29-year-old would not be returning for a third season with the Blue and Gold.

“We’d like to thank Kelly for his contributions over the past two seasons and wish him well in his future endeavours,” vice-president and general manager Joe Mack said in a statement.

The Michigan native signed with the Blue Bombers in 2010 and started every game at right tackle during his first season. He remained on the active roster last season but didn’t see any playing time.

“Winnipeg has become my home and I’m happy to say I’ll be remaining in the city even with my playing days behind me,” Butler said. “I want to thank the Blue Bomber organization and especially all Blue Bomber fans for their support over the last two years.”