Safety Plan in the Works for Manitoba Hog Farmers 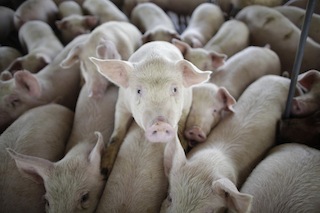 A safety plan and loss prevention program is being developed for Manitoba hog farmers and producers. (ROBERTO GIRALDO PHOTO)

The safety of working conditions facing Manitoba hog farmers is getting attention from Safety Services Manitoba and the Manitoba Pork Council.

The two organizations have come together to develop customized loss prevention programs for the unique regulatory and working environment of hog farmers in the province.

Fewer than one in 10 Canadian agricultural producers has a written safety plan, according to Safety Services Manitoba. In the midst of Canadian Agricultural Safety Week, which kicked off March 11, a detailed safety plan will be developed on the farmers’ behalf.

“Programs from the past have not had significant uptake because they were broad based, not industry specific, and very administrative heavy for producers,” said Miles Beaudin, manager of Quality Assurance and Labour Programs with MPC.

“Together we will create a customized program that works and which will minimize workload on producers.”

Safety plans will be developed with the participation of working farmers and be ready for producers to implement in eight weeks.