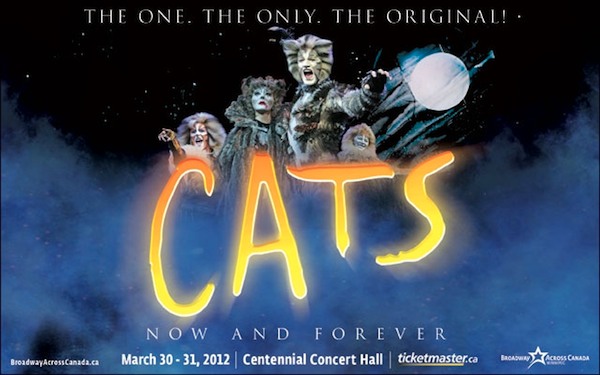 The hit broadway musical Cats is returning to Winnipeg for three performances March 30-31.

The touring production will play the Centennial Concert Hall, and be the first time the musical has been in the city since 2008.

Tickets are on sale now through Ticketmaster and the Concert Hall box office. Or you could try your luck and enter to win one of two pairs we’re giving away for the performance on Friday, March 30 at 8 p.m.

Simply fill out the entry form below and correctly answer the skill testing question. Showtimes and further information is available on Winnipeg.Broadway.com.

One entry per person, please. Multiple entries will not be counted. Winner must confirm receipt of their name being drawn and be able to pick up their tickets at the venue on the night of the event. All personal information is handled in accordance to our Privacy Policy, and then discarded after the contest. Contest closes Sunday, March 25, 2012 at 11:59 p.m. CT.  Manitoba residents only.