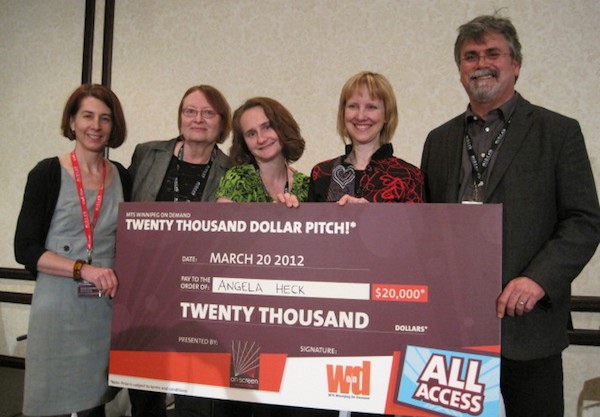 Winnipegger Angela Heck has come away the big winner at the 2012 MTS Winnipeg On Demand $20,000 Pitch!

Heck had three minutes to pitch her project, “BUZZ…(Manitoba Mosquitos),” to a jury of industry professionals on Tuesday night in hopes of scoring a $20,000 licence fee with MTS Winnipeg On Demand.

Heck’s film examines the culture that surrounds the not-so-humble mosquito and asks what our lives would be like without it.

Following the pitch at the Fairmont Winnipeg, judges had five minutes to offer feedback and ask any questions.

“This is really overwhelming,” Heck exclaimed in an On Screen Manitoba news release. “It sounds trite but you really do dream about this. It’s so exciting to be able to pitch in front of a hometown crowd and be so welcome and ultimately rewarded for your efforts. It’s unbelievable!”

The pitch offered a forum for Manitoba filmmakers to share their story ideas.