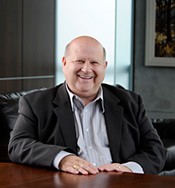 Former Manitoba Hydro CEO Bob Brennan will be the guest of honour at a luncheon this Friday to celebrate his 47 years with the public utility.

Brennan spent his entire processional career at Hydro before announcing his retirement in August. Scott A. Thomson assumed Brennan’s role on February 13.

The Manitoba Chambers of Commerce will host the luncheon at the Fort Garry Hotel beginning at 11:30 a.m. Tickets are $60 or $55 for Chamber members and can be purchased online.