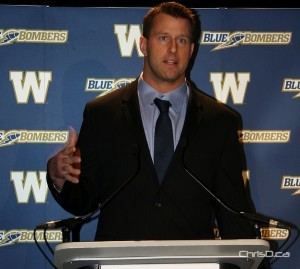 One of the Winnipeg Blue Bombers’ most outstanding and reliable defensive forces to ever dawn the Blue and Gold has decided to hang up his cleats.

Doug Brown, an 11-year Canadian Football League veteran who played every one of his 188 career games with the Blue Bombers, announced his retirement at Canad Inns Stadium Wednesday afternoon.

The New Westminster, British Columbia native kick-started his CFL career 2001 after originally being selected fifth overall out of Simon Fraser University in the 1997 CFL Draft by the Calgary Stampeders. After four years in the NFL with the Buffalo Bills and Washington Redskins, Calgary traded the 6-foot-8, 290-pound defensive tackle to the Blue Bombers after he missed the 2000 season due to injury.

Even with the capture of all the individual accolades a professional athlete could hope for, Brown tributes his career achievements and retirement decision to a man he and his teammates lost tragically in July of this past year.

“I met Richard Harris (defensive line and assistant head coach) in 2002,” Brown said. “2006 was the first year we were able to work together. I have to say 2006, 2007, 2008 were probably the three best years I had as a professional athlete, NFL or CFL, and that was all due to the handiwork of this gentleman.

“We had developed such a relationship, we actually made a promise to one another, a pact between us, that we’d started our careers together… at the same time, and that we should end them together. He always told me that he didn’t want to coach a defensive line group that I wasn’t a part of, and I always told him that I didn’t want to play for anybody that was coaching me that wasn’t him. That’s the extent and the strength of our relationship we had as the seasons progressed.”

“I just want to honour him. My tenure, my legacy in Winnipeg is tied to his and what he did for this football club. I think it’s fitting and appropriate that 2011 was both of our best seasons.”