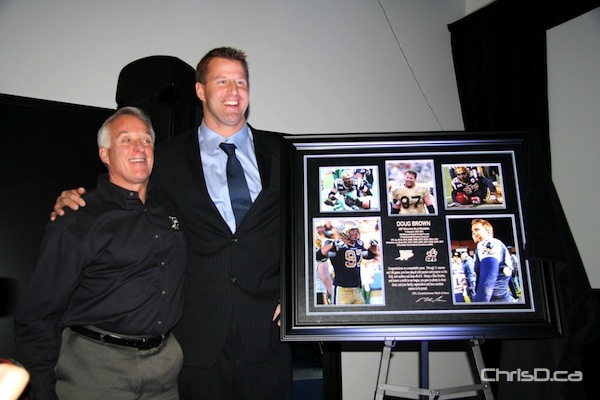 Defensive tackle Doug Brown is hanging up the cleats with the Winnipeg Blue Bombers.

Coming as a surprise to almost no one in the football community, Brown made the announcement Wednesday during a news conference at Canad Inns Stadium.

“There’s nothing I’d rather do. I love the game. It’s what I’ve done for the last 15 years. But unfortunately, there’s some things that leave you that disagree with my mental state in terms of how I feel about the game. Physically, I just don’t know if I can withstand another season.”

Brown played in 188 regular season games with the Blue Bombers, and was named a CFL All-Star seven times, a divisional All-Star eight times and was honoured as the CFL’s Most Outstanding Canadian in 2001.

“Having worked with him on different occasions, I could say without a doubt there is no better pro than Doug Brown,” head coach Paul LaPolice said. “He will be missed on the field for everything he was able to accomplish, but more importantly, he will be missed off the field for how he handled himself in the community throughout the province of Manitoba.”

Brown will join the CFL on TSN’s studio panel during the upcoming season, where he’ll be filling in on a swing basis.