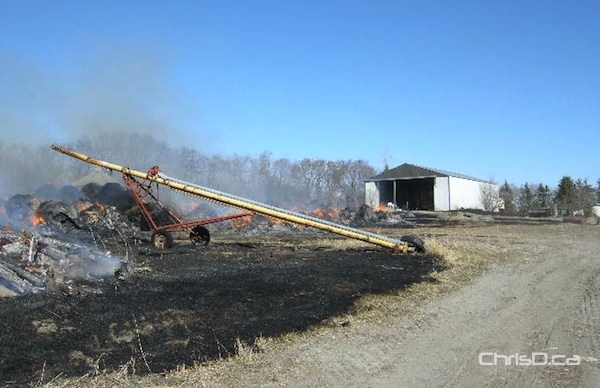 A fire in Lenore, Manitoba destroyed several structures, many of which were abandoned, on Thursday, March 22, 2012. (RCMP HANDOUT)

A fire in the community of Lenore has destroyed three abandoned structures and sent smoke billowing into the area.

The fire broke out around 2:45 p.m. on Thursday, with firefighters from Virden and Hamiota responding, including some local farmers who also helped to put out flames.

The blaze consumed two homes and a trailer, which were abandoned, as well as an occupied residence. The family inside was able to evacuate safely.

No injuries were reported in the fire, which is now under control. The cause hasn’t been determined, but RCMP say it does not appear to be suspicious.

Strong winds in the area caused some challenges for firefighters on scene.

Lenore is about 30 kilometres northeast of Virden.