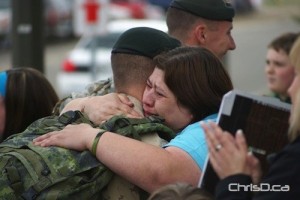 A Shilo soldier hugs a loved one upon returning from a mission in this April 2010 file photo. (SHAUN CAMERON / ITVBRANDON.COM)

Ten soldiers stationed at CFB Shilo will return home to Manitoba this afternoon after spending the past several months in Afghanistan.

Soldiers with the 1st Regiment Royal Canadian Horse Artillery were part of Operation Attention, based in Kabul. They were focussed on training and mentoring the Afghan National Army since last October.

Nearly all of the 50 once-deployed soldiers from Shilo that were part of the same operation have now returned home.

The latest round of soldiers will land at James Richardson International Airport at 5:45 p.m.