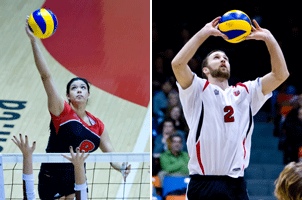 University of Winnipeg volleyball players Lauren Sears and Zack Diboll have been chosen as the 2011-2012 Wesmen Male and Female Athletes of the Year.

The announcement was made Thursday evening at the annual Wesmen Athletics Awards Banquet held at the Radisson Hotel.

Sears is a fifth-year middle and team captain, who was also named as First Team All-Canadian after helping the Wesmen to an impressive 14-6 record during the regular season. She was a starter for all 20 regular season plus four playoff matches during the year and finished in the top ten in several Canada West statistical categories, including first in points and service aces, third in kills, eighth in hitting percentage and 10th in total blocks.

Diboll, in his fifth and final season, was the starting setter for all 20 regular season matches in 2011-2012. He placed in the top ten in the Canada West Conference in assists (ninth) and digs (10th). One of the season highlights for Diboll was his season high 52 assists performance against the Regina Cougars in December, 2011.

← Previous: 'Save Osborne House' Rally Planned at City Hall Next: Finalists Revealed in U of M's 'Define Your Future' Contest →
Tags: University of Winnipeg | Volleyball