About 120 people turned out for a rally at City Hall in support of Osborne House on Friday, March 23, 2012. (STAN MILOSEVIC / MANITOBAPHOTOS.COM) 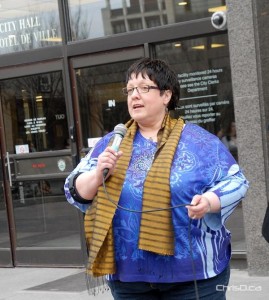 A rally is planned today to draw up financial support for Osborne House, a Winnipeg shelter for women and children who are victims of domestic violence.

The shelter was recently turned down for a request to receive $450,000 from the city it says it desperately needs to continue operations.

Victims of domestic violence could be turned away from the second oldest women’s shelter in the country if a solution isn’t found soon.

Nearly 500 people on Facebook have committed to attending the rally, which is set for 5 p.m. outside of City Hall.