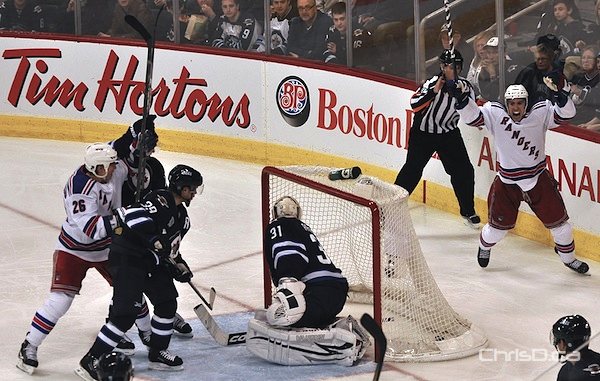 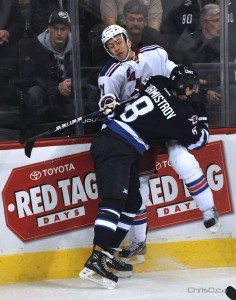 WINNIPEG — For the first time this season the Winnipeg Jets dropped their third-straight on home ice, blowing a 2-0 second period lead, falling 4-2 to the Eastern Conference leading New York Rangers.

Following a pair of early second period goals coming just 56-seconds apart from Spencer Machacek and Bryan Little, the Rangers (49-21-7) turned the game on a dime and scored four unanswered.

“It was tough to get anything going and then they got a two goal lead on us,” said Rangers captain Ryan Callahan. “I think our penalty kill goal kind of lifted the team up and gave us momentum, and we began to take the game over.”

Michael Del Zotto’s shorthanded marker began a torrid pace for New York, as Winnipeg then went on to take a handful of penalties, surrendering two power play goals and another just 14 seconds after the end of a four-minute advantage stemming from an Andrew Ladd high stick that knocked a cap off of Brian Boyle’s tooth and drew blood. 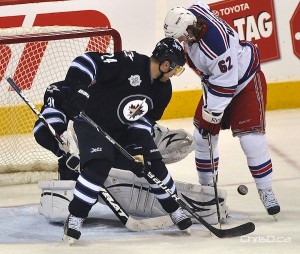 “When you look at the energy level it has (taken a toll),” said a clearly frustrated Claude Noel in his shortest post-game presser of the season. “I thought tonight was difficult. When we scored the two goals, even though you can feel the pain of not scoring 5-on-3, we’re still in pretty good shape. A couple things really didn’t help. The shorthanded goal gave them life. (We) killed off the four-minute penalty… and then the next shift you go out and give up a goal (and) they lead. I think it’s taken its toll. It’s difficult, you know. It’s not easy — it’s tough.”

In their three meetings with the Rangers this year — all losses — the offensively challenged Jets had only scored once against the league’s third-ranked defensive team (2.17 goals-against per game). They also failed to connect on five power play opportunities on Wednesday night, including 1:44 of 5-on-3 in the first period.

“Sometimes it’s an indication of your skill level, not always,” added Noel of his team’s season long struggles with the two-man advantage. “The theories I have I don’t care to share.”

He doesn’t need to. The Jets severely lack any serious form of scoring punch, and when your most productive line over the last few games consists of a player making the league-minimum salary (Tim Stapleton), alongside two players who spent the majority of the year with AHL-affiliate St. John’s (Machacek, Ben Maxwell), the writing is on the wall.

The Jets are now all but mathematically eliminated from the post-season with the Capitals, Sabres, and Senators all pulling away in the conference standings over the last week. A Sabres win over Pittsburgh on Friday night would make it official.

Winnipeg wraps the regular season with a four-game road trip before returning home for their season finale on Saturday, April 7 against the Tampa Bay Lightning.