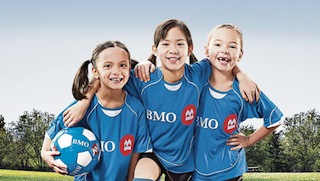 Canadian soccer coaches and parents can nominate their favourite youth soccer team (ages 7-12) beginning today through a new contest being launched by BMO.

From April 2 to July 13, nominations can be submitted to BMOsoccer.com in the form of an essay, photos or video to show why their team deserves to be crowned the BMO Team of the Week.

Weekly winners will be chosen by a panel of BMO judges starting April 18. Prizes include $500 cash, track suits and a gift to local charity.

Each of the winning teams will become finalists for the grand prize, which includes $125,000 towards a renovation of their soccer pitch. They will be named BMO Team of the Week 2012 Champion and will also receive a road trip to either a Toronto FC, Vancouver Whitecaps FC, Montreal Impact FC or Canadian National Team home game, and a donation to a charity of the team’s choice.

The public can also vote online for their preferred team between August 13-27 to help choose one of two grand prize finalists.