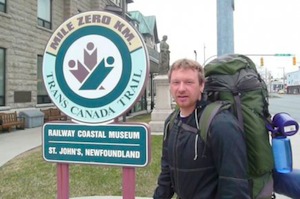 A British Columbia man hiking across the country along the Trans Canada Trail will begin his journey in Winnipeg on April 12.

Dana Meise is walking coast to coast as a personal tribute to Terry Fox, who continues to inspire him in his journey.

Meise started his trek, known as “The Great Hike,” in 2008 in Cape Spear, Newfoundland. Carrying a 70 lb heavy pack, Meise usually walks 30-40 kilometres a day for about six months every year, sometimes going more than a week without seeing anyone. Meise hopes to reach the West Coast before winter.

“Terry inspires and motivates me to complete this journey. His story is a rich and compelling piece of our history and the pride people have in him is truly moving,” Meise said.

Healthy Living Minister Jim Rondeau and trail enthusiasts will meet Meise at The Forks on April 12 at 9 a.m. to walk with him on the first leg of his trek to the Manitoba legislature.

Meise will arrive at the legislature for 10 a.m., where he’ll officially be welcomed to the province.

Once complete, the Trans Canada Trail will stretch over 22,500 kilometres, linking 1,000 communities from the Atlantic to the Pacific and to the Arctic Oceans.