All-Star Wrestler Commits to U of W for Upcoming Season 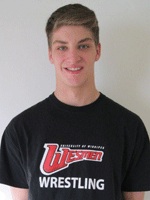 The University of Winnipeg has recruited a championship wrestler for the 2012-13 season beginning in September.

Jake Miller has committed to the men’s wresting program, and comes with a gold medal from the 2012 Ontario Federation of School Athletics Association Championships.

“Jake is regarded by many as one of the top recruits in the country on the men’s side,” said Wesmen Wrestling head coach Adrian Bruce. “He is a young man with a wealth of ability coming to us from one of the top Wrestling Clubs in Canada. He is as talented as they come.”

Miller will pursue a degree in Criminal Justice at the University of Winnipeg.