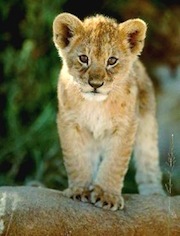 An African lion cub similar to this one was born at Winnipeg's zoo on March 30. (PUEBLO ZOO)

There’s a new arrival at the Assiniboine Park Zoo — a healthy lion cub.

The zoo’s two African lions are the proud parents of the cub, which was born on March 30. It’s the first child for six-year old mother Kayia.

“The zoo has a very successful birth rate and we are pleased that it continues with the healthy delivery of the new lion cub,” said Tim Sinclair-Smith, director of zoological operations.

Both Kayia and her mate, five-year-old male African lion Xerces, came to the zoo in March 2010. The African lions are on loan to the zoo from a private facility in Ontario and at some point will return.

The public will have to wait to see the cub for approximately eight to ten weeks before it can be placed into the lion exhibit.