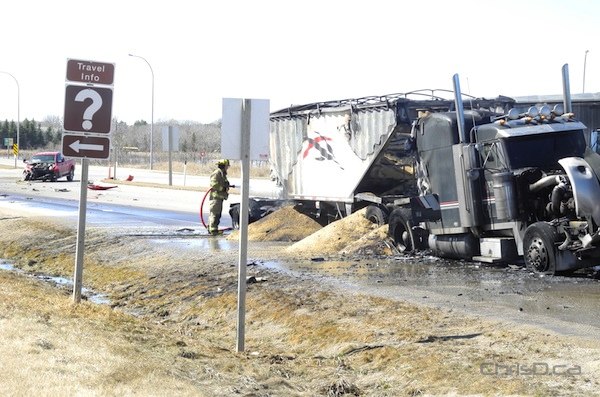 A pickup truck collided with a semi-trailer truck hauling grain on Highway 16 in Russell on Monday, April 2, 2012. There were no injuries. (RCMP HANDOUT)

No one was injured in a two-vehicle crash in Russell, Manitoba on Monday involving a pickup truck and a semi hauling grain.

The accident happened at about 2 p.m. on Highway 16 at the junction of Highway 83 — an intersection controlled with a stop sign.

The driver of the pickup truck, a 42-year-old man from the RM of Shellmouth, and the 39-year-old Brandon man driving the semi, were not injured.

Firefighters had to put out flames from the semi’s fuel tank, while crews had the highway closed for several hours to cleanup spilled grain.