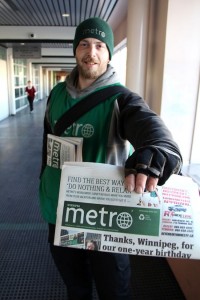 Winnipeg’s downtown skywalk system is about to get a whole lot greener.

Metro News has partnered with the City of Winnipeg to sponsor the skywalk system, connecting commuters in the city’s core to a number of downtown buildings.

Metro Winnipeg newspaper racks will be placed along the weather-protected skywalks, and Metro’s hand promoters will have exclusivity to hand out free copies of the paper to pedestrians in the walkway.

“Metro is proud to be part of the Winnipeg community,” said Steve Shrout, vice-president and group publisher, Metro Western Canada. “When we came to the city a year ago we immediately sponsored the downtown Spirit bus routes and the Downtown BIZ clean teams.”

Mayor Sam Katz will be on site for the official announcement at 10 a.m. in the Canada Post Building Walkway. Metro will then be providing pizza and pop from Papa John’s Pizza to commuters in the walkway.

The paper celebrated its one-year anniversary in the Winnipeg market on Wednesday.