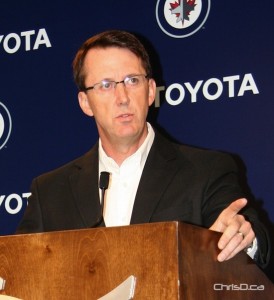 WINNIPEG — On the eve of the Jets final game of their first season back in Winnipeg, True North Sports and Entertainment chairman and team owner Mark Chipman held an informal chat with media on a wide range of topics.

Chipman addressed several lines of questioning, ranging from the team’s financial situation to his favourite moments from the season to the long-term outlook of the franchise.

When asked if the 2011-12 season lived up to his expectations, Chipman was candid.

“No, it didn’t. It did in some respects, but, I was just visiting with Chevy (general manager Kevin Cheveldayoff) this morning and we have a long-term plan to be successful in this league. We also had a short-term plan, and that was to make the playoffs and we didn’t do that.”

With free agent signing season approaching and many unknowns regarding which restricted and unrestricted players will return, Chipman commented on the outlook of the roster.

“I don’t want to give the impression that I am managing our hockey team, because I’m not. That’s what our professionals do.

“We’re a young team, and we stayed young by design. We agreed that we needed to let our young players play, and that’s how they’re going to get better. I don’t think you’re going to see a dramatic shift in the way we go about things next year. We’re going to continue to be a young team and let young players develop. If there’s an opportunity for us to get better, obviously we will do that. The fact of the matter is, there is no easy simple way to do that.”

Chipman also addressed some of the more fan-related issues regarding the team, including potential availability of season tickets to those 8,000+ on the waiting list.

“It doesn’t look like there’s a lot. I say that based on the response to playoff tickets. It was… pretty much at 100 per cent.”

“There’s no indication that there are, or anyone is willing to give (tickets) up.”

Chipman also shared his deep gratitude toward the amazing fan support that lasted throughout the season.

“(Support) seemed to get progressively stronger from one game to the next. It never tapered off from opening night.

“Thank you wouldn’t be enough. I don’t know how to put it into words. I don’t even know how to express the depth of my gratitude, and I can tell you David (Thomson, co-owner) feels the same way. He’s just been absolutely overwhelmed by the support we’ve received wherever we go.”