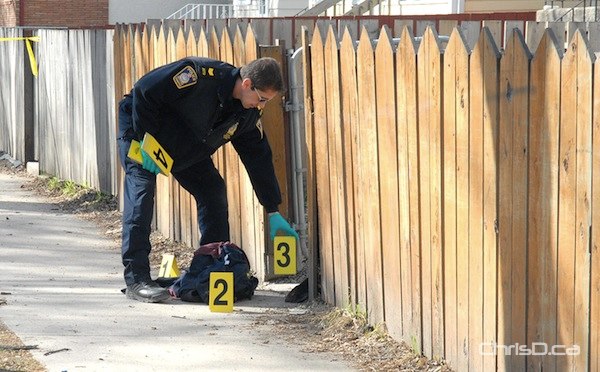 A Winnipeg police officer places evidence markers near the scene of where a man was fatally shot in the 600 block of Maryland Street on Friday, April 6, 2012. (STAN MILOSEVIC / MANITOBAPHOTOS.COM) 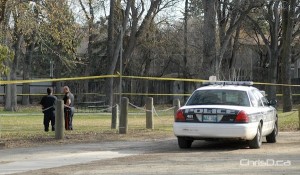 Winnipeg police block off a park in the 300 block of Henderson Highway while investigating a homicide on Friday. (STAN MILOSEVIC / MANITOBAPHOTOS.COM)

Police say the victim was located on the sidewalk and rushed to hospital in critical condition. He later succumbed to his injuries.

The victim’s name hasn’t been released and police are continuing to investigate. No arrests have been made.

In the second incident, police responded to an injured man in the 300 block of Henderson Highway at about 5 a.m.

Police say the victim’s injuries were considered suspicious. The man has since been pronounced deceased.

Autopsy results are pending and the investigation is ongoing. No arrests have been made.

UPDATE: Friday, April 13 — A 17-year-old male has been charged with second-degree murder in Berry’s death.

← Previous: Chipman Chats with Media, Reflects on Jets' Season Next: Jane Siberry to Perform at the WECC on May 6 →
Tags: Crime | Winnipeg Police