Home » News » Four in Hospital After Car Crashes into Store

Four in Hospital After Car Crashes into Store 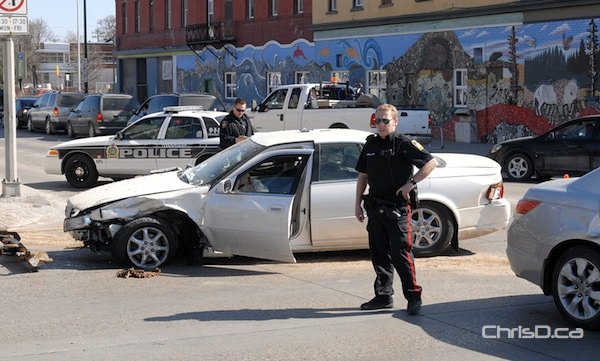 A sedan crashed into the front of Mitchell Fabrics at 637 Main Street on Wednesday, April 11, 2012. (STAN MILOSEVIC / MANITOBAPHOTOS.COM) 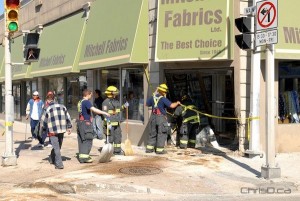 The front of Mitchell Fabrics was badly damaged after a vehicle lost control on Wednesday afternoon. (STAN MILOSEVIC / MANITOBAPHOTOS.COM)

Four people are in a Winnipeg hospital after a car crashed into a store on Main Street Wednesday afternoon.

The four-door Cadillac sedan plowed into Mitchell Fabrics at 637 Main Street at around 3 p.m. after colliding with a Honda Accord.

Traffic was diverted around the store near Logan Avenue while police investigated the crash.

One of the four people in hospital is reported to be in unstable condition, while the other three are listed as stable. 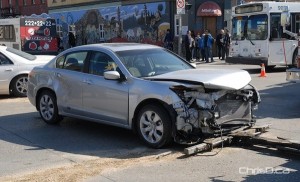 A Honda Accord was hit by another sedan that allegedly ran a red light on Wednesday. (STAN MILOSEVIC / MANITOBAPHOTOS.COM)

UPDATE: Thursday, April 12 — Winnipeg police have issued a ticket to the 65-year-old man driving the Cadillac, who they say ran a red light while travelling northbound on Main Street, colliding with the eastbound Accord on Logan Avenue. Drivers of both vehicles, aged 65 and 75, along with two male pedestrians, aged 49 and 51, were taken to hospital. The 51-year-old was listed in unstable condition, but has since been upgraded to stable.

← Previous: City in Talks with Developer to Build Water Park Next: ARTlab Opening at University of Manitoba →
Tags: Accident