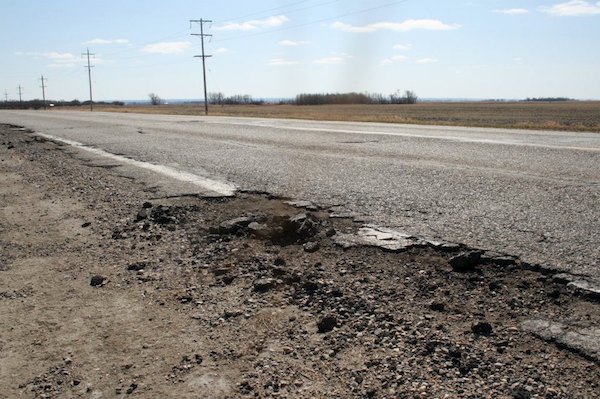 Since late March, CAA Manitoba has been receiving an earful from motorists on which roads are the worst in the province.

The first annual Worst Roads campaign gives Manitobans a chance to vote for which crumbling, congested or unsafe road they think needs to be fixed first.

“Almost 3000 votes have already been cast on 429 different roads in our province,” said Mike Mager, president and CEO of CAA Manitoba. “They can’t all be fixed overnight, but when that many people log on to vote, it tells us they care about the condition of their roads.”

St. James in Winnipeg tops the list so far as the worst road, followed by Marion Street, Molson Street, and Kenaston Boulevard. Highway 21 south of Brandon is currently ranked fifth. To get a firsthand look at the deplorable conditions, CAA officials trekked more than 700 kilometres this week to see the roads voters in Brandon, Goodlands, Deloraine have named.

“What we saw told us some Manitoba highways need improvement just as much as the roads in our cities,” said CAA spokesperson Liz Peters. “Both Highway 21 and 10 south of Brandon are beyond being a bumpy frustration. Their deteriorating condition is downright dangerous.”

The public can vote online until April 24 for what they think is the worst road. Results will then be tabulated and presented to local and regional governments.