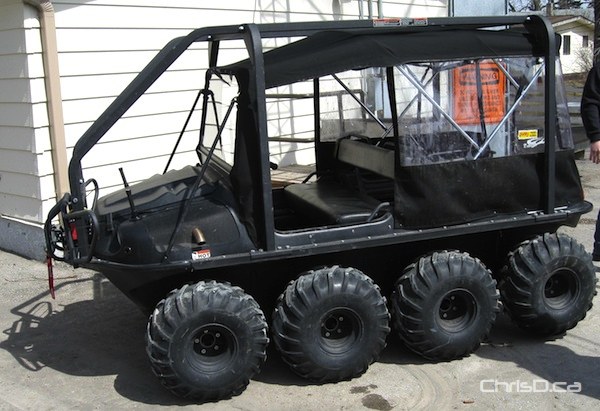 RCMP used an Argo to rescue several people in the RM of Stuartburn after a group of ATV riders became lost on Sunday, April 15, 2012. (RCMP HANDOUT)

A group of ATV riders were rescued Sunday after becoming lost in the RM of Stuartburn.

RCMP say a teenager and two children contacted authorities shortly before 6 p.m. when they couldn’t find their way out of some bush.

The STARS helicopter was dispatched to their location after GPS coordinates were obtained through cell phone triangulation, where a RCMP officer was dropped off. The three were then airlifted to where rescue crews had a staging area.

According to police, the group was thought to have been suffering from hypothermia before being rescued.

Three people unrelated to the group began their own search and became hung up in a swampy area, needing to be rescued themselves.

Due to diminishing daylight, air support was no longer available. The Altona-based Integrated Border Enforcement Team was dispatched with a RCMP floating off-road vehicle.

Eleven people were rescued in total. Four people, including two children aged five and six, a teenager and an adult were taken to hospital for treatment.