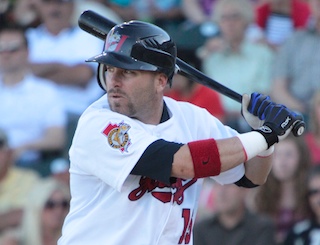 Veteran outfielder Jon Weber is returning to the Winnipeg Goldeyes for a second season.

The 34-year-old played 69 games with the Goldeyes last season, hitting a team-leading .326 with 10 home runs and 65 RBI after being signed in June. He was also tied with Luis Alen for the team lead in doubles with 30.

“He single-handedly changed our season last year,” manager Rick Forney said. “He’s about as productive as you can be for a veteran player in our league.”

At the same time, the Goldeyes announced the trade of outfielder Cristian Guerrero to the Sioux Falls Pheasants in exchange for a player to be named later. The move was made as the Fish already had a maximum of four veterans on their roster. Guerrero was signed as a free agent earlier this off-season after playing the last four seasons with the Gary SouthShore RailCats.