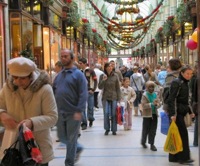 The move by the NDP, previously suggested by Liberal leader Jon Gerrard, will see retailers given more freedom to extend their hours beyond the pre-set 12 p.m. to 6 p.m. regulations currently in place.

“(Budget 2012 will loosen) restrictions on Sunday shopping by working with business and labour to keep Manitoba businesses strong and competitive,” the budget outlined.

While shoppers may be cheering the move to allow for more spending time, a local union isn’t pleased.

“I appreciate the desire for the public to want round-the-clock shopping, those who want it are usually not the ones who have to work it,” said Jeff Traeger, president of UFCW Local 832.

The union represents more than 7,500 retail workers at Safeway, Loblaws, Sobeys, IGA and Co-Op stores across Manitoba. Traeger says these members all have collective agreements that protect them on Sunday shopping hours, ensuring that it is voluntary, and if they do work, they are paid a premium.

The Winnipeg Chamber of Commerce is applauding the relaxed hours, having lobbied for such a change for years.Manitoba has some of the strictest Sunday shopping policies in place, next to Quebec the Maritime provinces. Convenience stores can set their own hours and are exempt.

Consultations will be held with municipalities and businesses to determine new operating hours.