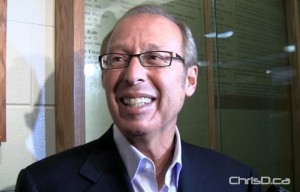 Katz and the Association of Manitoba Municipalities (AMM) expressed disappointment Tuesday that the province failed to introduce a long-term plan for an investment in infrastructure.

“Everyone knows we have a crisis in infrastructure,” Katz said. “Manitoba communities still have no long-term, sustainable funding solution that would allow us to plan for the future. We’re falling so far behind in fixing our roads, bridges, sewers and community infrastructure that we may never catch up.”

“This isn’t a Winnipeg problem or a rural problem — it is a Manitoba problem,” said AMM president Doug Dobrowolski. “Our infrastructure deficit is in the billions of dollars and municipalities just can’t handle it on their own. This budget did not deliver what is needed — a new source of growth revenue dedicated to fixing the problem once and for all.”

Katz was hoping for one point of the PST to help fund infrastructure improvements, above the funding the city already receives from the province for city roads.