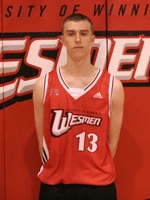 The University of Winnipeg Wesmen men’s basketball team will have Kelvin Clippers forward Kristjan Lamont at their disposal next season.

Lamont averaged 15 points, nine rebounds and two blocks per game this past season and played a vital role in leading the Clippers to the AAAA Provincial semi-finals in March. He was named a Provincial All-Star and was also recognized as a Graduating All-Star.

“The addition of Kristjan to our program is an exciting one,” said Wesmen head coach Mike Raimbault. “He is a dynamic athlete who has the ability to play multiple positions and has the potential for tremendous growth and development.”

← Previous: Taxpayer Watchdog: Province's Spending On the Rise Next: Laughter on the Menu at Reh-Fit Centre Fundraiser →
Tags: Basketball | University of Winnipeg