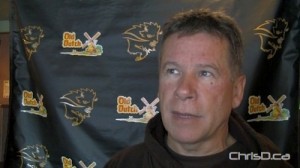 The Manitoba Bisons football team will open up their 2012 season on the road when they play UBC on Saturday, September 1.

The 2012 CIS football schedule was released late Wednesday, putting the Bisons on the road for exactly half of their eight-game regular season schedule.

Following the Labour Day weekend game at Thunderbird Stadium, the Herd will return to Winnipeg to host the Saskatchewan Huskies on Saturday, September 8.

“It always allows a chance to quickly bond when we start the season on the road and look forward to being in UBC during week one this season,” said Bisons head coach Brian Dobie. “Of course, there is excitement as we get closer to play in the new stadium and host the first CIS football game there against our provincial rivals at Saskatchewan.”

The Bisons will play their first home game at Investors Group Field on the 8th, while their homecoming game will be Saturday, September 15 against the Calgary Dinos.

See the complete schedule below (all times central):