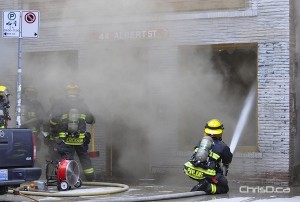 Firefighters work at the scene of a massive fire at 44 Albert Street on Thursday, April 19, 2012. (MAURICE BRUNEAU / CHRISD.CA)

Several Exchange District businesses have been lost after a massive fire broke out Thursday morning.

The blaze at War on Music, located at 44 Albert Street, started at around 9:30 a.m. Firefighters worked feverishly to save neighbouring structures, which included the Ken Hong Restaurant and the vacant Royal Albert hotel.

At least one aerial ladder could be seen dousing flames from above.

There were no reports of any injuries. Damage is estimated at $400,000.

Nearby streets were closed and traffic was being diverted. People in nearby office buildings were evacuated as a precaution, but have since returned to work.

According to the Manitoba Historical Society website, the business block that houses 44 Albert Street was built in 1877.

UPDATE: Friday, April 20 — The cause of the fire has been ruled accidental as the result of an electrical failure at a receptacle inside War on Music. Damage is estimated at $630,000.

Firefighters work at the scene of a massive fire at 44 Albert Street on Thursday, April 19, 2012. (MAURICE BRUNEAU / CHRISD.CA)