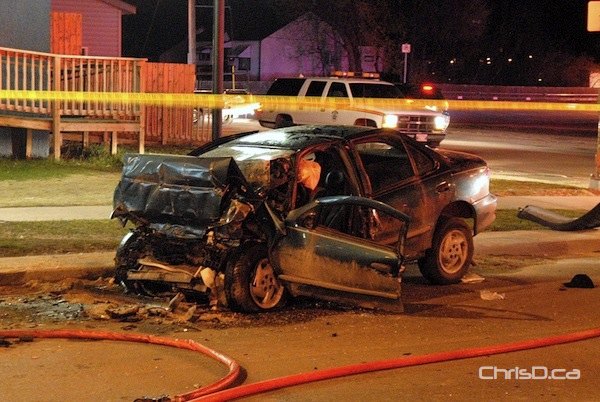 The driver of this Chevrolet Cavalier succumbed to his injuries after rear-ending a Winnipeg Transit bus on Saturday, April 21, 2012. (STAN MILOSEVIC / CHRISD.CA) 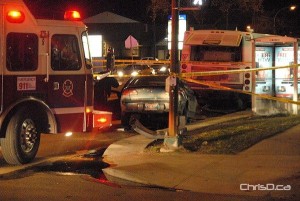 A car rear-ended a bus on St. Anne's Road at Worthington Avenue on Saturday. The driver of the sedan succumbed to his injuries. (STAN MILOSEVIC / CHRISD.CA)

A man has died after the vehicle he was driving slammed into the back of a Winnipeg Transit bus on Saturday night.

The crash between a Chevrolet Cavalier sedan and the bus happened at around 8:30 p.m. on northbound St. Anne’s Road at Worthington Avenue.

Firefighters worked to free the driver of the sedan from the wreckage. The vehicle’s front end was severely crushed after going under the rear bumper of the bus. Witnesses on scene said the driver didn’t appear to slow down before hitting the bus and drove directly into the back of it. Paramedics rushed the man to hospital in critical condition, where he later succumbed to his injuries.

Police had the intersection closed for several hours while they investigated.

No passengers on board the bus appeared to have been injured. Members of the Central Traffic Unit continue to investigate.

← Previous: BBQ and Blues -- New Winnipeg Festival Will Have It All Next: Winnipeg Harvest Celebrates Young Volunteers →
Tags: Accident | Death