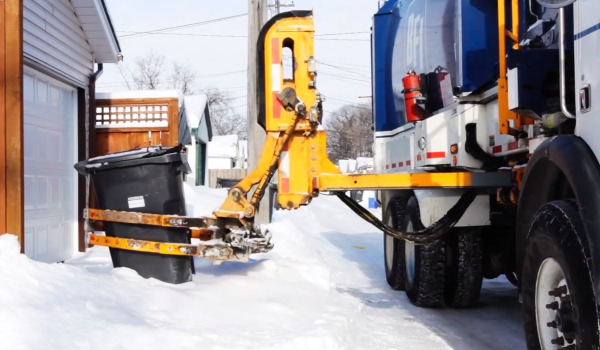 New automated garbage carts will be rolled out city-wide in the next few weeks. (CITY OF WINNIPEG)

Garbage and recycling collection in Winnipeg is about to get a drastic makeover.

The city on Thursday released details of its planned overhaul of the way Winnipeggers dispose of their garbage and recyclable items. One of the big changes will be new automated garbage and recycling carts to be placed at the curb city-wide.

The carts will begin being delivered to residents in June, starting in the city’s northwest area. Those using AutoBins will receive their new carts by the end of July, followed by the remainder of the city after that, starting in North Kildonan and ending in Charleswood. It’s expected to take four months before each household is equipped with the new carts.

Another change will be the days on which garbage and recycling is picked up. A new set weekday collection schedule will replace the current five-day model. Residents will be assigned a collection day that will remain the same throughout the year, except for the weeks with Remembrance Day, Christmas Day and New Year’s Day, when collection will shift over one day for residents with a collection day falling on or after the holiday.

An information package will accompany all new carts once they’re delivered.