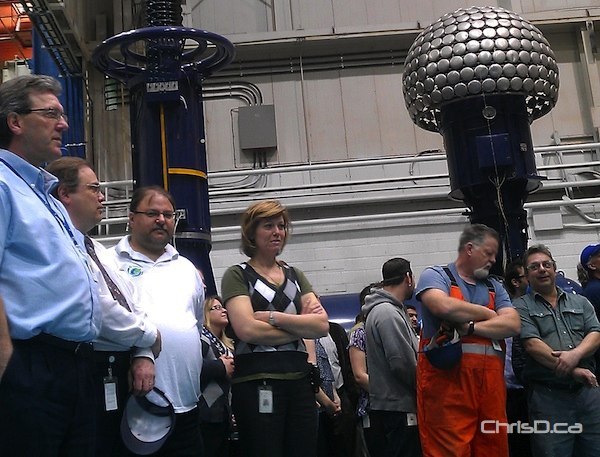 Employees of CG Power Systems Canada Inc. gather for an announcement on Friday, April 27, 2012 by the Manitoba government to create an Energy Jobs Fund. (CHRISD.CA)

The Manitoba government is creating a $30 million Energy Jobs Fund to invest in the province’s renewal energy companies.

Companies that manufacture equipment for hydro dams, electricity transmission and other forms of renewable energy will have an upper hand to successfully bid on the estimated $18 billion in capital investments Manitoba Hydro will be making over the next 10 years.

“Manitoba is a leader in renewable energy, with major investments in hydro, wind, geothermal heating and bio-energy,” Premier Greg Selinger said. “We are creating (the) fund to ensure Manitoba businesses can take full advantage of the economic opportunities that will come with the biggest expansion of Manitoba Hydro in decades.”

Friday’s announcement was made at CG Power Systems Canada Inc., an employer to about 310 people, which produces large power transformers including high-voltage, direct-current (HVDC) converters as well as mobile substations.