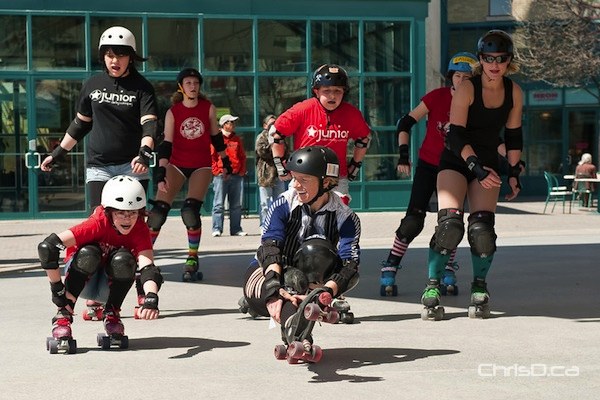 Players from the Winnipeg Junior Roller Derby League mix it up with veterans during a demo skate at The Forks on Saturday, April 28, 2012. (TED GRANT / CHRISD.CA) 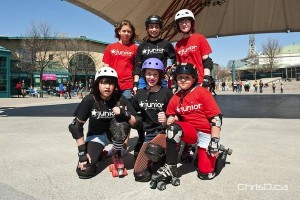 The Winnipeg Roller Derby League is expanding to include newer blood. Youth aged 10- to 17-years-old are now in a league of their own for the upcoming season.

Saturday at The Forks, a demo skate was held to create buzz for the 22 players who have been training since January. Various sizes and athletic abilities of the participants have made up the new junior league, which includes only two boys. Coach Kim “Ella Hitzgerald” says of the players were apprehensive at first, but their self confidence has greatly improved. The juniors picked their own team names, “Blackeye Bruisers” and “Deadly Reds,” and are ready to rumble during their first bout on May 5 at the Fort Garry Curling Club.

Tickets can be purchased at BrownPaperTickets.com.