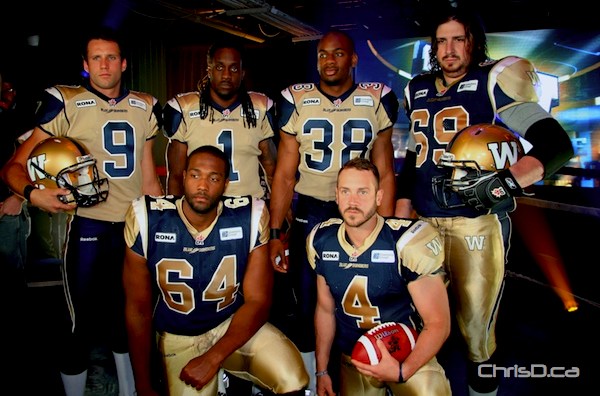 Players of the Winnipeg Blue Bombers model the new home and away jersey designs during a news conference on Tuesday, May 1, 2012. (DARRIN BAUMING / CHRISD.CA) 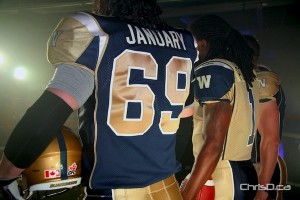 The Winnipeg Blue Bombers will have a refreshed look when they hit the field for the 2012 season.

The football club unveiled the pair of home and away gear by Reebok on Tuesday at the Pan Am Boxing and Athletic Club — exactly a week after debuting a new logo and helmet design.

The jerseys were two-and-a-half years in the making to reengineer the look, according to Jerry Maslowsky, vice-president of marketing for the Blue Bombers.

“This was a detailed process,” Maslowsky said.

Three main components were looked at when redesigning the look, including bringing back the bold “W,” keeping it Blue and Gold, and looking at the potential for a classic retro royal look.

Maslowsky said two of those components are now in place, with all three being implemented into the look by this time next year.

The new jersey also has increased elasticity, improved resiliency and moisture wicking technology which will be beneficial to all players.

“I like the jerseys. I think they’re great,” said quarterback Buck Pierce. “The gold really pops, and the sleeves and the shoulders, I think it’s a good combination of colours.”

Wide receiver Kito Poblah is also a fan, saying, “I like it. I didn’t really like the white. It was too plain of a jersey. Just to get some colour in there I really feel like the guys are excited.”

The Blue Bombers will wear gold on the road, while donning navy blue uniforms while at home.

Fans can now purchase the new jerseys at the Bomber Store and online.